In mid-October, the new blockchain project Aptos was launched, which caused a severe buzz in the crypto space. We haven’t had cases like this for a long time. But is APTOS that good?

In today’s article, we will figure out what APTOS offers us, how you can make money on it, and whether the project will be profitable in the long run.

Aptos is a layer 1 blockchain with fundamental scalability, security, reliability, and upgradeability principles. Created by a team of over 350 developers over the past three years, it aims to revitalize the Tier 1 space with new ideas for consensus mechanisms, innovative contract design, system security, performance, and decentralization.

His vision is a blockchain that enables mass adoption in web3 and enables the DApps ecosystem to solve real user problems.

The primary foundation of Aptos are:

It all sounds brilliant and complicated. But in fact, it can be summarized that all of the above features of Aptos are designed to solve the trilemma (decentralization, security, scalability). All this to facilitate the mass adoption of Web3 for companies and enterprises.

About hype and suspicious tokenomics

On October 18, the new Aptos blockchain was launched, and the largest cryptocurrency exchanges immediately launched trading in the native currency of the Aptos ecosystem – the APT token. And the developers began to announce new projects on this network. But let’s take a look at why he fired so loudly and how well the marketing campaign worked:

The names are severe; therefore, with a superficial analysis, buyers began to trust the project even before it was launched.

A compelling reason. But in fact, Aptos gained popularity not due to its innovations, since such promising projects appear regularly, but more because of how much Aptos was hated for their tokenomics. They called her completely unreliable and constantly criticized them. Let’s take a look at it:

By the end of 2031, there will be 1.5 billion tokens on the blockchain compared to the original 1 billion. The smallest unit in Aptos will be known as the Octa.

The community will receive approximately 51% of the tokens on the blockchain, followed by the main participants with 19%, the fund with 16.5%, and investors with 13.48%. The funds will be distributed to the community over the next ten years through grants and other programs. Tokens provided to investors and essential contributors have a four-year vesting period.

The opinion of most experts is that whales dominate the Aptos tokenomics. The fact that 82% of APT tokens are staking attracted attention, suggesting that this significant amount of APT could be sold to retail users. Before the release of the tokenomics summary, several crypto users expressed concern that trading in the blockchain token would begin without this information.

We agree with this opinion and, with a deep analysis of the project, thoughts about its unreliability arise.

In addition, many detractors laughed at the random distribution of 51% of APT tokens among the “community.” Finally, opponents hailed the decision of all exchanges, including Binance, FTX, and others, to include APT in spot pairs on the first day as a clear warning that severe volatility is expected.

This is the main reason APTOS is still on the buzz. The entire community was at a loss regarding how many users could earn fabulous money out of nothing. Some raised $3,000 each, others a little more than a thousand. All they did was brand the free NFT in Aptos when the project was in the testnet stage. And on October 19, the Aptos Foundation launched an airdrop of APT tokens. According to them, more than 20 million APTs were distributed among 110,000 users.

All users immediately ran to see what kind of Aptos coin it was, and the demand was incredible.

Not to say that the exchanges have contributed significantly to the Aptos hype. They didn’t do any marketing campaigns; they just listed the token. In the first minute, the price rose to $59 and then gradually dropped in jumps. As a result, it fixed at the cost of $7~9 and is now trading at approximately this level.

Also, along with the leading network, Dapps was launched on it:

Is APTOS cryptocurrency a good investment?

I will answer this question right away. Aptos cannot be called a good or bad project, but we can say it is high-risk. It is straightforward to earn and also easy to lose. And that’s why:

Aptos calls himself “Solana-killer” but is oblivious to Solana’s known mint bugs. 95% of all NFT-mints on Aptos are highly greedy and focused on quick profit. There are many examples of degen-mints, but flippers from Solana continue to fly into them. If we draw parallels with Aptos on Solana, then mints with such declared supplies and prices would be unable to launch on SOL.

An example of a recent is Aptos Toad Overload. They are already trading at -60% of the mint price and are unlikely to sell out with a 6969 NFT supply and a mint price of $85 equivalent. 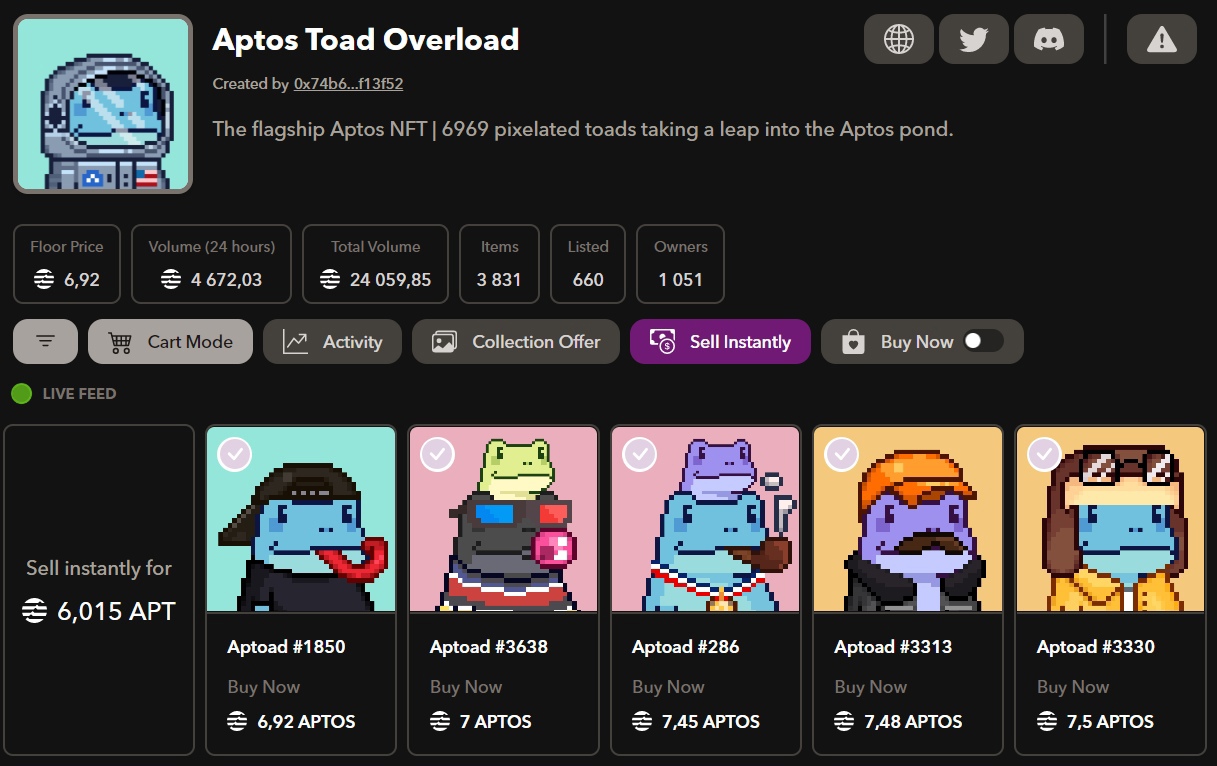 A very unreasonable transfer of a large amount of money. Almost everyone took it. 569,000 APT or more than $4,000,000 per day. And a reasonable question arises: to whom will buyers of tokens worth 4 million on a public sale sell these same tokens? Especially given the current liquidity.

It is possible that this can bring great results. But the risk is overwhelming.

And this is one of the most apparent reasons for the high risks of earnings on the projects of this network. Don’t Forget the Controversial Tokenomics

Looking at Aptos now, this is the most publicized project in recent times. Especially during the crypto winter. Favorable prospects for it may be if Aptos can keep the audience before the start of an uptrend in the market.

Now Aptos is still a very young player in the market, and not even a month has passed since its launch. Therefore, it is somewhat problematic to analyze the trend since any “sneeze”, and its price can turn both positively and negatively. 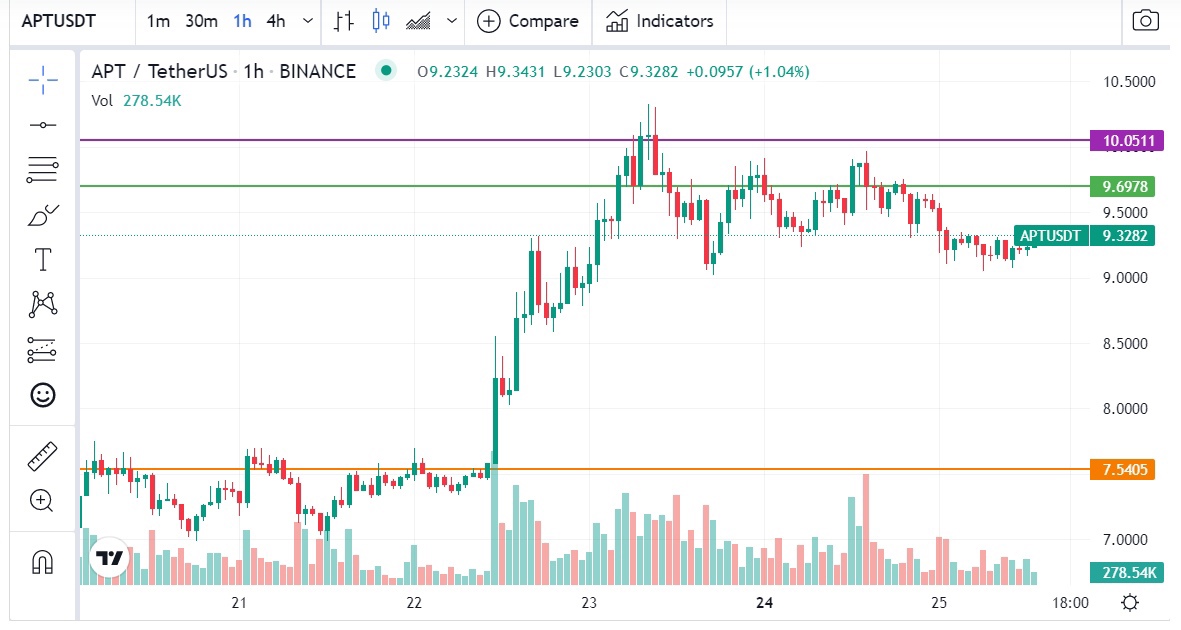 On October 22, there was a substantial jump of 20%. On this day, Aptos’ market capitalization exceeded $1 billion, and the number of APT transactions per second increased from 4 to 16.

The day before, Aptos’ brokenness was discussed on the network, and its TPS does not exceed the bitcoin speed. However, on October 22, the new blockchain still showed results and overtook Bitcoin in terms of TPS.

Aptos forecast: The price will likely not fall below $ 7.5 shortly; they are constantly buying back. So far, the resistance level is holding at $10; it is impossible to break through, so APTOS fluctuates around $9.3 ~ $9.5. What is UMA Crypto? UMA cryptocurrency has been in the works since March... read more What is ETC(Ethereum Classic) Crypto? If you're wondering what Ethereum is, it is... read more

What is Ethereum? This decentralized cryptocurrency is a network of thousands of computers... read more What Is BICO Crypto? The BICO cryptocurrency is based on the Ethereum blockchain... read more